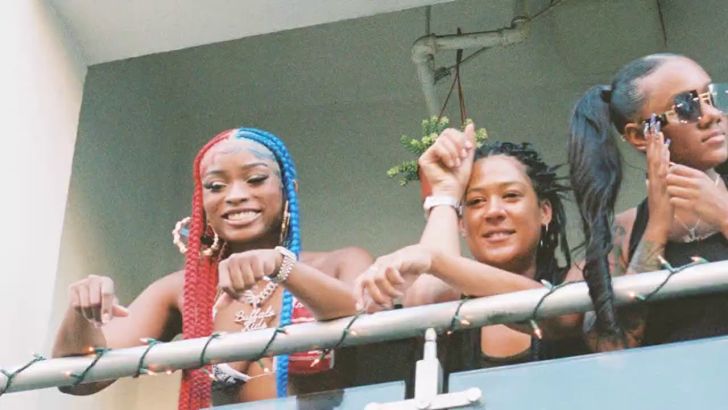 This newsletter marks the twenty-seventh installment of Irregular Vegetables, a weekly series of CABBAGES emails where I share links to recent writings from other hip-hop/rap journos and critics, squeezing in my own work as I see fit. These midweek editions hit inboxes every Thursday. Enjoy this week’s reads and keep scrolling for Crudites, the recurring feature where I recommend three new singles/videos from hip-hop artists you may not be familiar with yet. (No Q&A this time, sorry, but if you’re interested you can read my recent chat with Conway The Machine in Forbes.)

It’s a July afternoon and I’m at photographer David LaChapelle’s airy Los Angeles studio. Kylie Jenner, Scott’s partner of three years, and Stormi, their two-year-old daughter, are being ushered out after posing for a family photo. An animal trainer is wrangling an albino Burmese python. ​“I brought scorpions, just in case,” she tells a chill LaChapelle, dressed in jeans and a T‑shirt. The snake is for Scott to try on around his neck, but the 29-year-old star, who wanders in shirtless from a dressing room, seems more enthralled with his new pitbull, Rocket Astro, which he bought ​“maybe a month or two ago”. He picks up the dog and hugs him tightly. (Read more at The Face)

The Whitewashing Of Black Music On TikTok

The talk of gentrification on the app doesn’t stop with Jersey club. Recently, the emerging “slowed + reverb” production style has been criticized as an attempt to gentrify the classic Houston rap style of chopped and screwed. That sound is nearly the inverse of Jersey club: developed by the late Houston producer DJ Screw, the music involves slowing a song way down, until it sounds like it’s melting, and then cutting up its lyrics. Slowed and reverb is far less technical, and it doesn’t utilize DJ Screw’s chopping technique, but its methods clearly echo screwed music, and it longs to induce the same mood. As slowed and reverb grows more popular across TikTok, it isn’t the music itself that’s drawing the backlash; it’s the excision of DJ Screw from its narrative. (Read more at The New Yorker)

With a song like “Swipe Lessons” (which features the Shitty Boyz in the visual), the 19-year-old literally gives fans a play by play on how to come up on some bread illegally. His songs are chock full of instructions and methods, including the use of the Tor browser, VPNs, CashApp, and knockoff SIM cards. In fact, his name is derived from his MSR X6 hardware that is used to clone credit cards. With his scamming expertise, he was able to touch his first million as a teenager. When it comes to music, it’s baffling to think he’s only been making music professionally for 2 years. Most recently, he unleashed his Black Air Force Activity: The Reload mixtape, the deluxe to the original which hails standout single "Punchin'" featuring NLE Choppa. (Read more at Flaunt)

Whereas ‘The Listening’ was built around a radio broadcast, ‘The Minstrel Show’ follows the programming schedule of the UBN Network (aka “U Black N***as Network) on Sunday, September 11. The album plays out like a variety show, with an introduction, live musical performances, backstage interludes, and commercials. It showcases and pokes fun at many of the facets of Black culture circa the mid-2000s, while still expressing love and respect for all of its facets. Nearly all of the production is handled by 9th Wonder, while Phonte and Big Pooh are at the top of their games lyrically. (Read more at Albumism)

“When I Speak About These Things, I Don’t Talk About Them to Glorify It:” An Interview With Benny the Butcher

Confidence and voice are the among most important parts of a rapper and Benny is peerless. He pauses after words to add tension. He’s the barber telling you stories while giving you a cut that looks like he was barely paying attention to your hair. There’s never a flow that doesn’t sound like Benny is sitting down and handing out some game. That’s why he says on the Westside Gunn deep cut, ‘’Lucha Bros, ‘’You getting game from them, it’s gon’ stagnate you, but with the shit you learn from me, it’s gon’ graduate you.’’ His music conveys the hard times and crime of kill or kill be killed, East Buffalo. (Read more at Passion Of The Weiss)

Though many interpolations and samplings of “Halloween Theme - Main Title” rework the opening section, Houston production pioneer Egypt E—who first made his name as half of the Rap-A-Lot act The Terrorists—deserves credit for exploring different parts of the track. He blended various samples from the second half of the song with parts of Kraftwerk’s classic “Home Computer,” producing a unique and deftly executed instrumental. The end result is Ganksta N-I-P’s profoundly dark and violent “Horror Movie Rap” from his ‘92 debut ‘The South Park Psycho.’ (Read more at Micro-Chop)

How LVRN Became A Superstar-Making Label On Their Own Terms

Since March, the music industry has been turned upside down. The pandemic has “affected the executives more than it has the artists,” Baiden says. “Our artists are already recluses on their own. Quarantine was already a lifestyle for them. So, it didn’t really affect them in terms of their creative processes.” Meeting the challenges head-on, LVRN has dropped two major projects during quarantine: 6LACK’s ‘6pc Hot’ and Summer Walker’s ‘Life On Earth.’ While the writing and recording processes may not have been interrupted, the collective was forced to think outside of the box when it came to the album rollouts. (Read more at Complex)

A short drive or train ride from East New York and things quickly change, as money gets pumped into Brooklyn, but the low-income areas remain the same. It’s like living behind a glass wall in your own hometown, with wealth and good fortune shoved in your face but no way to access it. In the best Brooklyn drill music, you can feel that tension in the rappers’ voices. Why shouldn’t they be able to have nice things and live good, too? It’s right there. And if, nobody is going to help them, they’ll figure it out, by any means necessary. (Read more at Pitchfork)

Before the shooting, Conway was considered one of the best rappers in Buffalo, a city more known for its hapless professional football team and proximity to Niagara Falls than as a hip-hop hotbed. When he picked up with his career, Conway had to reconstruct his entire flow, switching from complex, multisyllabic flows to a slower, conversational cadence. That flow is now the cornerstone of Griselda, the Buffalo-based collective he co-founded with rapper and blood brother Westside Gunn, whose retro-centered brand of street rap recalls the “golden era” of ’90s New York City hip-hop, when groups like Mobb Deep and Wu-Tang Clan were at their creative peaks. (Read more at Washington Post)

My former XXL music editor, Bonsu Thompson, was editor-in-chief of The Source at the time, and his mission was to resurrect the storied brand. Bon put together an amazing package honoring Hov’s sixth studio album. Unfortunately (due to politics as usual), Bonsu had to bounce before the issue’s release. I’m still super proud of my final Source cover story. It’s a short essay that came from the heart, a real snapshot of what rap was as a culture at that time. I touched on everything from the battle with Nas to Just Blaze and Kanye changing the sonic landscape to the fact that ‘Blueprint’ was released on the tragic day the Twin Towers came down in New York City. (Read more at The Motto)

Black Thought Is Loved And Feared By Your Favorite Rapper

When you consider the music career of Black Thought, the trajectory challenges that of any rapper from any region or era. Even after The Roots won a Grammy in 2000, Black Thought remained in mainstream anonymity while being recognized by hip-hop purists as one of the best to ever do it. And then, he became the voice of Late Night with Jimmy Fallon, propelling him into the living rooms of millions across the country every weeknight. (Read more at Level)

The Beatnuts’ rugged rhythm behind “This Shit Is Real” sits on the back half of Fat Joe Da Gangsta’s 1993 debut ‘Represent’ for the Sony Music–acquired Relativity imprint. With lyrics that affirm both his South Bronx bonafides and his Puerto Rican heritage, the track showcases the then-23-year-old Diggin’ in The Crates rapper’s raw and profane style (as does the rest of the largely Diamond D–helmed album). (Read more at Vulture)

Armani Caesar, “Simply Done (feat. Benny The Butcher)”: A talented Buffalo vet on the verge of finally getting the spotlight she deserves, the Griselda spitter conjures up a Queen Latifah classic over a Preemo beat, leaving her better-known labelmate the formidable task of following her tight verse.

Shooters’ View, “The Feels”: Buoyed by a narcotized beat reminiscent of Jet Life’s most laidback vibrations, this Atlanta artist opens himself up to emotional truths and confessional catharsis on this illuminating track.