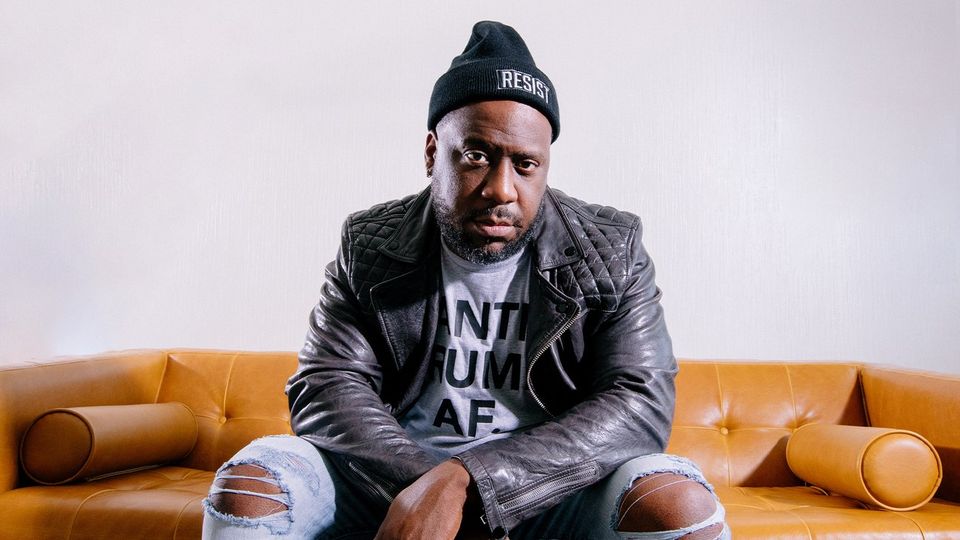 Nobody on this planet should be permitted to cover Radiohead, save for Robert Glasper. As I've witnessed before in the quaky pre-COVID utopian heyday of comically cramped Blue Note Jazz Club concerts, and then again this weekend as one streamed remotely into my bedroom, the bandleader and genre-flitting jazz visionary gets full, unadulterated clearance. Because, in practice, he controls the nuclear football of W.A.S.T.E. material in ways that virtually anyone else would otherwise steer helplessly into the twin toxic realms of maudlin parody and disengenuous lounge lizardom.

The former broods; the latter seethes. Though by no means as distinctive a vocalist as Yorke, Glasper nonetheless owns this semi-subtle rewording. Via these tweaks, he converts it into something altogether different than what unspooled from the Oxfordshire boarding school induced + Exeter arts-educated rock star. Joined onstage by bassist Burniss Travis and drummer Justin Tyson, as well as Black Radio DJ Jahi Sundance, it transmutes into a low grade protest in a liminal space between post-bop and post-bap. Suddenly, even with his wry smile, the maestro behind the Korg Kronos atop the mighty Rhodes conjures up vividly anguished images of discrimination, segregation, and persecution. These are no longer existential white male concerns, but rather the collective Black sighs of interminable delays and counterproductive calls for patience. And in the urgently radicalized pandemic luminosity of Black Lives Matter tumult, the word jumble has a sort of sliding doors effect–choices that alter meaning and augment reality.

Perhaps you think I've read too much into this. Well, consider that Glasper has reached for Radiohead before. On the 2007 Blue Note full-length In My Element, he creatively conjoined Herbie Hancock's "Maiden Voyage" with "Everything in Its Right Place" for a moving medley. In a 2012 interview with The Guardian, he said of the Kid A intro, "It lends itself to reharmonising and reclaiming, it lends itself to jazz." (I've seen him play the thing live, and it can kinda creep up on you if you're not paying close attention.) Some years later, he took on the In Rainbows highlight "Reckoner" for the Grammy-nominated Covered, yielding a relatively straight-ahead rendering that almost mutes the hip-hop flirtations of the angular original with adept drummer Damion Reid's artfully stunning restraint.

The point being, Glasper's drawn so much divine inspiration from Radiohead for so long that to suggest he hasn't altered Yorke's lyrics for his own purposes seems willfully absurd. Four Black men on a stage playing this rendition together should alone bring clarity to suspicions and eradicate any doubt. It also doesn't hurt the ol' thesis that, in its final stage, his "Sardines" benefits from triggered samples of a famous passage from a Dr. Martin Luther King Jr. oration. Now, maybe I should've mentioned that earlier, but if the artist himself placed that reveal towards the piece's end then why the hell shouldn't I?

"Lord, I’m down here trying to do what’s right. I think I’m right. I think the cause that we represent is right. But Lord, I must confess that I’m weak now. I’m faltering. I’m losing my courage..."

From there, the charged set pulk/pulls from various albums in an expansive and still-expanding catalog, including his major label debut Canvas and the Robert Glasper Experiment's hip-hop and R&B fusion affairs ArtScience and Black Radio 2. (A highly-anticipated third Black Radio volume is due on Loma Vista sometime in 2022.) Midway through, he unpacks the inspiration behind a newly written original entitled "Madiba," namely that of Nelson Mandela whose voice weaves in and out of the electric piano-led excursion alongside Sundance's nimble scratches and the Travis/Tyson rhythm section. On the elegiac "Enoch's Meditation," we hear from no less than Harry Belafonte, Gil Scott-Heron, Philando Castile's girlfriend Diamond Reynolds, and Dave Chappelle. Amid the expertly played keys, Glasper makes ample room for their words, but as with Yorke's on "Sardines," they in turn become his own to wield.

Be he in ShrapKnel or solo, Curly Castro rarely fails to make things spectacular, as striking and visceral as rhyming gets. Plenty of rappers could invoke the martyrdom of Robert Hutton, the teenaged Black Panther trailblazer/treasurer murdered by Oakland pigs. But here, this Philly emcee conjures his memory with a movement in mind, his expression of the Black American Experience a righteous spew of poetic vitriol via poignant tracks like the BDP-level mini-opus "Black August In III Parts." Like political precursors dead prez and Paris, his voice holds pain and violence concurrently, noticeably choking back the former while unleashing the latter on "Weapon 13X" with Juggaknot Breeze Brewin and "Dah Switchness." He's lived his history homework, infused that with pulpy pop fiction ("Bleek Shadows," Caporeira Recall"), and brought it home to our filthy, stinking gentrified present. He is justified in his fury. This is Castro's masterpiece.

Earlier in the year, Chicago rapper Semiratruth offered up MIRA, a concise and cogent effort that set off a flare warning of imminent greatness. This follow-up, largely self-produced, sees the flickering embers of its predecessor ignite new fires. At sitcom length with 14 distinct tracks, her intimately chaotic collage of beats, samples, and words can do dizzying damage to those expecting ease. There's love at stake in "Cosmos" and "Neva Go, not with me," and feelings fiercly guarded with a shadowboxed stance on "Tell Me Bout The Stars" and "Djembe." On "Space Crew," she centers NYC's Mimz The Magnificent and Chicago's Tre Johnson over her soft rock slapper before closing it all-too neatly. Wait until FlyLo hears this...

UNiiQU3 has been a unifying fixture in Jersey club and related tri-state dancefloor scenes for the longest, bouncing around various imprints as DJ, producer, and vocalist as it suits her. To kick off a fresh arrangement with Local Action, the London label that previously gave us Lil Jabba and Yamaneko, she drops a pulse-pounding set of tunes in the neatly packaged Heartbeats EP. In our current rap renaissance of sex positive femme spitters, she is far faster and more furious than most, doling out rapidfire hooks over peak time bangers for "Microdosing" and "Shame On Me." She aligns with the reliably sharp rapper Dai Burger for "What Chu Waiting For" and collabs with R3LL on cool club construction "Unavailable."

Whether you're reading this first thing in the morning or just as you nestle into your bed to sleep, please enjoy this "Last Donut of the Night."