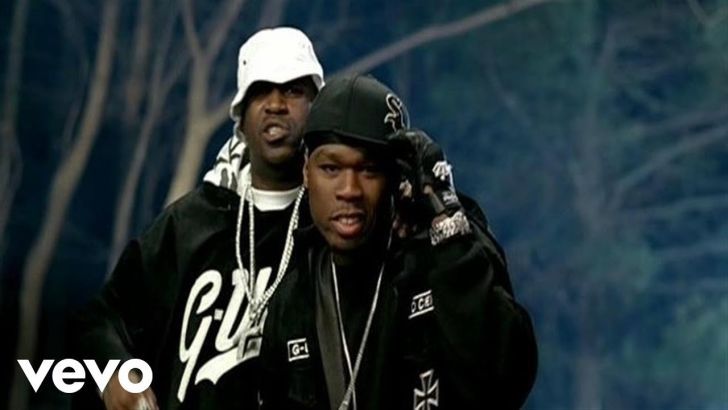 Every Kanye stan worth his pricey, fugly kicks remembers, or at least knows about, the 2007 battle between Graduation and 50 Cent’s Curtis. The media made a big deal at the time about the album release date PR stunt, much to the obvious delight of the major labels behind these two full-lengths. It was a then-rare instance where the typically insular horse race around first-week album sales became both public facing and transparently high-profile. A real world mirror to American Idol’s pop democracy-by-phone, the narrative behind this capitalist clash of rap titans empowered listeners to choose sides and vote with their dollars. When the outcome ultimately favored Graduation over Curtis, many interpreted the ~266,000 unit disparity between the two as the death knell for the G-Unit movement.

Two years prior—and 20 years ago today—West had already gone toe-to-toe with one of 50’s artists, and ultimately won. His 2005 sophomore set Late Registration dropped simultaneously with Tony Yayo’s solo debut Thoughts Of A Predicate Felon. The Roc-A-Fella record claimed the No. 1 spot on the Billboard 200, while the G-Unit soldier’s Shady outing took a distant second place, the former selling over 600,000 more copies than the latter.

Unlike the later Graduation vs. Curtis match, there was no realistic expectation of a fair fight in the 2005 face-off between West and Yayo. With the benefit of a 50 Cent feature, “So Seductive” had peaked respectably at No. 48 on the Hot 100 roughly a month prior. But with The Massacre’s“Just A Little Bit” still a top 20 single and Late Registration single “Diamonds From Sierra Leone” jumping to No. 43 as the week’s designated “greatest gainer” on that chart, Thoughts Of A Predicate Felon didn’t seem primed to top the Billboard 200. Two weeks later and on a clear path to No. 1, the poppy “Gold Digger” with Jamie Foxx bested Yayo’s slipping “So Seductive.”

It feels surreal and maybe even unfair to consider Thoughts Of A Predicate Felon, an album that took No. 2 on the all-genre album charts and sold over 200,000 units in a single week, a failure. After all, West’s extraordinary rise was just that: extraordinary. Hypothetically, had Yayo’s album arrived just seven days earlier, it would have handily won the Billboard 200. His competition for the top spot would have been a Hillary Duff “greatest hits” collection that sold less than half what his record did the following week.

But release date timing wasn’t the sole factor that made Thoughts Of A Predicate Felon the first G-Unit Records full-length not to earn at least RIAA gold certification. After Get Rich Or Die Tryin’ went 6x multi-platinum in less than a year, 50 leveraged those spectacular sales and his correspondingly massive profile to put other rappers in his set on. Quite shrewdly, he led with 2003’s G-Unit group album Beg For Mercy, appealing to his mixtape day-ones as well as the new audience who loved his solo hits “21 Questions” and “In Da Club.” Despite being an original member alongside Lloyd Banks, Yayo’s legal woes limited his practical involvement on the project to just two songs, with newer Southern signee Young Buck standing in his place.

The success of Beg For Mercy and its Yayo-less singles “Stunt 101” and “Wanna Get To Know You” cleared the way for back-to-back solo albums the following summer for newly minted stars Banks and Buck. Aided by 50 Cent features on their respective lead singles, 2004’s The Hunger for More and Straight Outta Cashville both went platinum. Yayo appeared these albums, a strategic move to keep him visibly aligned with his labelmates’ wins and presumably permit him to share in the financial rewards.

That fall, G-Unit Records began pushing its West Coast representative The Game, who, despite the imminent fallout, generated two Hot 100 singles with 50 before the year was out. The second of these, “How We Do” ensured The Documentary’s mid-January 2005 release date. A third single with 50 called “Hate It Or Love It” confirmed The Game as yet another G-Unit success story. At the same time, 50 was promoting his highly-anticipated follow-up to Get Rich Or Die Tryin’. The first pre-release single “Disco Inferno” had debuted the prior December, but the Scott Storch helmed “Candy Shop” proved a smash hit. With two credited Yayo features, including a “Hate It Or Love It” remix with Banks, Buck, and Game in tow, The Massacre arrived at the start of March and predictably topped the charts. It went 4x multi-platinum in mid-April.

Another Storch production from that album, the aforementioned “Just A Little Bit” received the single treatment in May. Released at the same time, Yayo’s “So Seductive” was essentially pitted against 50’s next surefire hit. It was one thing to have The Documentary compete with The Massacre, seeing as The Game’s pre-release singles had performed so well. Furthermore, the Dr. Dre-bolstered narrative set him apart. But despite being a presence on every G-Unit Records album up until that point, Yayo hadn’t had the ability to build momentum the way Banks and Buck did post-Beg For Mercy. He was the third South Jamaica artist on the roster, and the top-ranked of the three was, again, in the midst of running his own album campaign.

Simply having a 50 feature tacked on to his single wasn’t going to be enough to differentiate Yayo from the pack. Though “So Seductive” certainly wasn’t about to flop, it came after at least a year’s worth of an aggressive marketing and release strategy for the label. Between Banks’ April 2004 single “On Fire” and Yayo’s long-awaited major label single as a lead artist in May 2005, the market was unquestionably oversaturated with tracks boasting 50’s voice, including his placement on Eminem’s “Encore.” After 15 total weeks on the Hot 100, “So Seductive” didn’t die from cannibalization so much as it drowned.

The lead-up to Thoughts Of A Predicate Felon showed where G-Unit’s priorities were at. In a July 2005 cover story for XXL, 50 spends an inordinate amount of time discussing the making of his Get Rich Or Die Tryin’ Hollywood biopic and his fractured relationship with The Game than his longtime friend’s forthcoming album. (That Game was actively encouraging his own fans to sabotage the album’s first week sales certainly didn’t help matters.) A June issue of Vibe put Yayo in a peculiar front-of-book spot about white girls and hip-hop that didn’t even name the record he was promoting.

That latter publication would give Thoughts Of A Predicate Felon the lead review slot in its August 2005 issue, with an ostensibly positive rating of three-and-a-half stars. But in it, Vibe writer Justin Monroe pointed out a characteristic flaw about Yayo’s album that proved common among his then-contemporary critics. Simply put, the release hewed too closely to the well-established G-Unit formula for its own good. Christian Hoard at Rolling Stone maintained a similarly civil tone with his three star evaluation, but with it the consensus around the album’s middling status was growing. Far less kind, Jeff “J-23” Ryce’s take over at HipHopDX used the opportunity to compare him unfavorably to his labelmates, who he asserted had pulled off the G-Unit templates far better on their own projects. Lee Henderson’s similarly harsh PopMatters review was less about Yayo, who he clearly couldn’t care less about as an artist, than about assailing the entire G-Unit business model.

Whether one agrees or disagrees with these critical assessments, there’s no question that some faction of 50 Cent’s target demographic were no longer amused by what G-Unit had on offer. Though Yayo appears to have taken the brunt of this blunt narrative shift, the fact remains that Thoughts Of A Predicate Felon’s lack of a distinct identity compared to the rest of the label’s prior discography made him a viable target for their pent-up ire. And with West’s fresh sounding Late Registration right there for obvious contrast, a rift if not a reckoning was bound to occur.

Tony Yayo, victim of circumstance. I could leave it at that, but I won’t. As a Queens-bred rap fan who rocked with G-Unit’s music back in those days, I’ll contend that the primary blame for Thoughts Of A Predicate Felon’s relative failure—commercially and critically—is his to bear. Yayo wasn’t some weed carrier, no mere hanger-on looking to leech off of 50’s name and fame. He was a solid rapper repping for his boro, a vital and enjoyable part of the mixtapes like 50 Cent Is The Future and No Mercy No Fear that made it all possible.

Incarceration may have delayed Yayo’s formal debut, and the realities of what being behind bars does to one’s creativity and mental health cannot be dismissed. But given what happened for G-Unit between 2003 and 2005, and the way 50 kept his voice on every single album release, he knew he would eventually have his moment in the spotlight. He may not have had final say on the beats, some of which suit him far better as an emcee than others. Still, he had years to hone his craft, to step up his game, to prepare. Regrettably, Yayo’s performance across Thoughts Of A Predicate Felon suggests that he did none of the above.

If you happened to cop Iron Wigs’ Your Birthday's Cancelled for Mello Music recently, you know how good Chicago’s Vic Spencer sounds over UK producer Sonnyjim’s beats. Trace that back to their prior collabs in the Spencer For Higher series, or move forward with this just-released third installment. The rapper’s smoke-tinged vocal tone provides a gratifying contrast with the beauteously blunted soul sonics of “Nickel Bags At The Freaknik” and “Van Dammit.” As if the pair weren't solid enough on their own, the featured guests bring bright spots too, particularly Ché Noir on “The Best Natural Face” and the perennially underestimated Jeremiah Jae on “Parachute Made Of Money.”

Dipset diehards know this Brooklyn native from his tenure with Purple City. For those who miss those glory days of New York mixtape abundance, Agallah’s latest effort brings that feeling back with a baker’s dozen bursting with streetwise bars. “Upper Echelon” and the confrontational “Respect 101” match the tenor of his robust catalog. Musically, Brownsvillain 2 does a good job of bridging past and present, with the wintry concrete throwback “Illest Alive” jibing well with the authentic new bap vibes of “No Showboating.” Strategically placed near the end, “Living My Dream” paints the kind of lyrical picture that you have to have lived through in order to execute correctly.

If you’ve kept up with Westside Gunn in 2020, that means you’re familiar with the Conductor, Conductor, Conductor beat tag. Matching the vibes of his Flygod 2 and Pray For Paris placements, Conductor Williams continues his longstanding creative partnership with Kansas native rapper Stik Figa on this heady new bap gem Tomorrow Is Forgotten. Expounding with existential and spiritual gravity on the complications of the streets, “The Caged Bird Screams” offers tremendous lyrical depth to match the jazzy hue of the music. With Jigga-esque clarity, “The Ritual” addresses the hardships and hindrances of being Black in America, while “The Earth” offers a more hopeful narrative.

This week, Def Jam announced that Public Enemy had returned to the fold. (What?!) Some 22 years after He Got Game, Chuck D and Flavor Flav plan to drop What You Gonna Do When The Grid Goes Down this September with the record label where they made their name in the rap game. After the somewhat political rap-rock sideshow Prophets Of Rage, P.E.’s feature-heavy 2020 remix of “Fight The Power” showed how timeless the themes of their material remain. To that end, 1988’s anti-carceral “Black Steel In The Hour Of Chaos” endures as a well-respected albeit less-heralded single from their catalog, one that speaks presciently well to our current revolutionary moment.