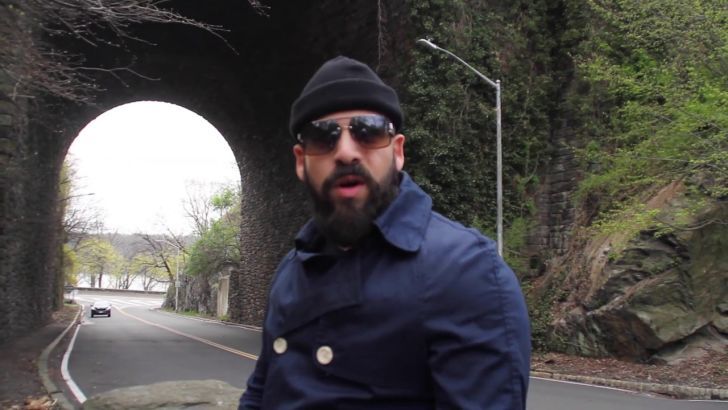 “Rotate your head like a gyro, my hair grows in knotty spirals / Feet resembles Christ's description from the Bible / Water walker, immune to all physical torture / Pull out fast in a Porsche, upon a double-crosser”

Greetings once again from the couch, where I revisit complex RZA bars like a grizzled humanities professor studying ancient texts with a magnifying glass, occasionally sipping from a big snifter of brandy.

Truth be told, I’ve done remarkably little drinking since the pandemic sent me to my room without supper. I have a fairly well-stocked home bar, but since mid-March I’ve probably had on average about one drink a week. We’re all coping with this situation in our own way, and given that my mode has been to write through it at a dizzying pace, getting blotto hasn’t had much appeal. As a freelancer, I work from home even in good times, so I’m used to having sober late nights massaging my words into something worth submitting to an editor. I wouldn't call it clean living, given my Cathy Guisewite levels of chocolate consumption, but at least it’s somewhat clear headed living. We can’t all be shamanic gurus like RZA…

This newsletter marks the tenth installment of Irregular Vegetables, a weekly series of CABBAGES’ emails where I share links to recent writings from other hip-hop/rap journos and critics, squeezing in my own work as I see fit. These midweek editions hit inboxes every Thursday as we all self-quarantine and try to protect the most vulnerable among us from COVID-19. Enjoy this week’s reads and be sure to scroll down to check out a bonus Lettuce Wraps Q&A with Bronx rapper Bloo.

There are moments you imagine for yourself as a teenager. Wild visions of success and wealth and coolness. Being smack in the middle some ultra-vivid “scene.” The sort of experiences that famous people seem to always have and the rest of us almost never do. Moments like hanging out in the basement of a Staten Island mansion, watching The RZA, founder and architect of the Wu-Tang Clan, walk into the room with his crew. Seeing him dressed in a black leather jacket and boots, black jeans, and a black cap — no jewelry, no splashes of color. One part rockstar; one part austere Daoist. (Read more at Uproxx)

El-P Has Made Peace With His Past

2002’s ‘Fantastic Damage’, dedicated to “kids worried about the apocalypse,” is a document of war, murder, and urban decay written before 9/11 but released into a world profoundly changed by it. “Deep Space 9mm” worries that America will go out like ancient Rome, and “Dead Disnee” ponders seeking refuge in Disney World as American cities burn, several years before the Mouse descended on Times Square. 2007’s ‘I’ll Sleep When You’re Dead’ is leaner and more well rounded, though no less grim. At a time when Brooklyn-based indie music was a Day-Glo dance-punk party, ‘I’ll Sleep’ spoke to a generation “carpooling with doom and disease” alongside a gifted cast of prog, goth, metal, and indie legends well before artists on that spectrum started to pop up in the credits of big rap and pop albums. (Read more at Vulture)

Moving Units Without a Major Label

No stranger to phenomenal success at a young age, Magic Mike first earned himself a radio gig at age 13 with a pause tape mix. By the time he was 22, his ‘DJ Magic Mike And The Royal Posse’ debut was slated for release on Cheetah Records. With no distributor to speak of, Mike’s first official album started to move units at a breakneck speed. By selling to Florida residents directly out of the back of his van, Mike unloaded so many copies of his debut record that he and his team were unable to to keep track. “We didn’t realize what we were or where we were at,” he told Red Bull Music Academy hosts Torsten Schmidt and Emma Warren in a 2004 interview. “Once we counted how many albums we had sold, we were at 1.3 million copies.” (Read more at Micro-Chop)

The double album features Blu’s childhood friend, Miguel, Exile’s former bandmate, Aloe Blacc, and L.A. legend Aceyalone. It’s a triumphant return for a duo ready to receive their flowers once again; a nostalgic trip that still finds a way to sound remarkably fresh. Almost a decade-and-a-half after their emergence, Blu and Exile once again sound like one of the sharpest hip-hop duos coming out of the West Coast. (Read more at Complex)

“I Have to Go Hard, It’s Mandatory:” An Interview with Bravo the Bagchaser

With co-signs and features from AzChike and Fenix Flexin, Bravo is well established amongst the rap hierarchy in LA. He’s featured on a remix of Drakeo the Ruler’s “Pippi Longstockin” with 1TakeJay, and one gets the feeling that Drakeo doesn’t fuck around with his features. If Bravo didn’t bring the heat, he would have been cut. In fact, Drakeo had this to say about the rising star: “Bravo, I’d heard he was good, but I wasn’t about to throw the n**** on the song until I heard him rap, and when I did, I was like damn, actually the shit is real cool.” That’s the gold standard in LA rap. Drakeo’s co-sign is the word from on high, even when he’s behind bars. (Read more at Passion Of The Weiss)

Mister Cartoon and Estevan Oriol have captured the world of East Los Angeles and beyond for nearly 30 years. Cartoon’s stylistic choices merge the worlds of jail artwork and graffiti together while Estevan has captured still moments in some of the rawest and chaotic environments. Their work has influenced a generation of artists and photojournalists that followed but more importantly, it gave the world insight into East L.A. from their perspective. A world that balances the beauty and resilience of Chicano culture and the bleak reality of L.A.’s underworld. (Read more at HotNewHipHop)

A Look Back at Gangsta Pat’s “Deadly Verses”

The Memphis underground was overlooked by the rap industry-at-large for so many years that the scene needed to develop creative self-sufficiency to survive—prospects were so dire for the city’s rappers that 8Ball & MJG moved to Houston to make their name. Because Memphis was all Memphis had, many of the city’s most formative MCs also made their own beats… Gangsta Pat also produced and played on his own instrumentals, unsurprising for someone born the son of Stax Records drummer Willie Hall, the percussionist on future hip-hop touchstones like Isaac Hayes’s ‘Hot Buttered Soul’ and a member of the Blues Brothers band. (Read more at Bandcamp)

Franky Hill Is Always Getting Stronger

Freedom and bombast are at the center of ‘SELF.’ In contrast to 2018’s ‘USER,’ Franky Hill is focusing on lightness, keeping it real Jersey, and barrelling through his pain. He’s stunting on his demons. He’s drinking nine-ounce glasses of wine and getting his mental right. Though Franky has had to sacrifice a lot of time and energy—time with family, especially—to keep the momentum of his come-up going, he has no regrets. Armed with a powerful relationship with God, Franky Hill knows what’s meant for him is meant for him. (Read more at DJBooth)

Future Recaptures His Dark Magic on ‘High Off Life’

All the biographical stuff aside, ‘High Off Life’ is an occasionally lazy but intermittently amazing album that delivers overall. With a few exceptions like “Accepting My Flaws” and “All Bad,” a hyperactive joint effort with Lil Uzi Vert, ‘High Off Life’ skews dark and mistrustful, with beat placements from Wheezy, Southside, and 808 Mafia and truly unscrupulous one-liners like “you talkin’ back to me I’ma cut you throat” (“Too Comfortable”). Obviously it’s the size of two albums and the themes are still largely the same. Future counts his luxuries and games out disproportionate responses to totally reasonable complaints of infidelity, but there are shades of the indefinable something that made the Future Hive a thing in the first place. (Read more at The Ringer)

After being drafted into hip-hop band the Roots in 1994 upon moving to Philadelphia, the group’s first album ‘Organix’ leaned heavily on Storch’s distinctive use of the Fender Rhodes and would help define their sound. Storch’s playing eventually lead him to Dr. Dre, for whom he came up with the classic piano riff that propels the 1999 hit “Still D.R.E.” From there, Storch went on to feature in and produce hit records for the likes of Beyoncé, Fat Joe and Justin Timberlake, becoming one of the most sought after producers of the mid-’00s in the process. (Read more at Red Bull Music Academy)

“We try to capture a moment or vibe. Ever since the first album, which was totally spontaneous, we talk about what we wanna feel from the next record. I love the first album but it was really just us spitting and having fun. The second was us bringing in a little more of our souls. For the third, we reacted off the turmoil of the times. Mike calls it our “blue record,” which I think is appropriate. This time we wanted those moments of introspection to come when they were needed but not permeate the record. We knew it was much more of a fiery, punch-you-in-your-face vibe we were feeling.” (Read more at Entertainment Weekly)

“The good thing about doing this type of work with Prince Paul, being the innovator and rule breaker that he is, his fans are accustomed to him stepping outside of the box and his own box,” Don Newkirk says. “Nobody expects him to make another ‘Prince Among Thieves.’ Nobody expects him to make another De La Soul. They just expect him to be Paul.” (Read more at Forbes)

Anyone who knows me knows I’m an MF DOOM freak. From KMD to Madvillainy, I’m all about the vaudeville villain. So when Spanish Ran, one of my favorite current producers operating here in New York, dropped a new bap project with The Bronx rapper Bloo called MF Bloo, you know I had to cop it on sight. Just this week, the duo dropped a socially distanced visual for highlight “Ain’t No.”

The Bronx has long been a haven and a hub for Latino rappers. How has your home borough's hip-hop history impacted your work and development as an artist?

Well, first and foremost, I would say the era I grew up in. A lot of great Latino rappers were in their prime, from Fat Joe to Big Pun, The Beatnuts. I viewed rap in a whole. I admired rappers on their style more than ethnicity. But I’d be lying if I didn’t say it made me feel good seeing a Puerto Rican like Pun murdering that mic. With all the fire music that was out at that time, it only made me want to go just as hard. You can feel the heart beat of Hip Hop in the Bronx.

You've been working with producer Spanish Ran for a minute now, previously dropping the Gracias project last year. What prompted the two of you to make this DOOM-themed MF Bloo record?

I honestly think me and Ran subconsciously knew an album like this was going to be created. That’s my brother, so he knows the type of beats I like to rhyme to. I love a challenge. I’ve always been a huge fan of Dilla and, of course, Madlib. So we were having a convo on what should we bring to the next project. I wanted to get weirder in a comic book super villain kind of feel. MF Doom instantly comes to mind. Madvillainy was such a dope album, which gave some inspiration. So we wanted to pay homage to one of MF’s art covers, but with our own little twist to it.

Man! Hands down it’s “Rhinestone Cowboy.” Doom danced on that beat! Sheesh. This song alone was a big part of MF Bloo’s inspiration.