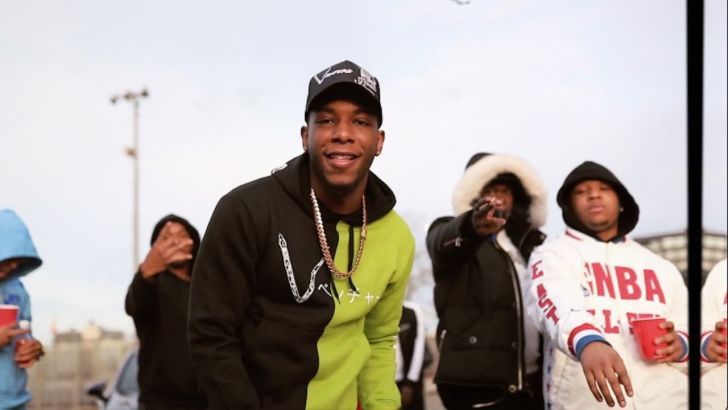 “Look, look, lost Pop and the pain hurt / Tryna stay focused, I drink on this liquor and take Percs  / Two steppin', I hit it first, we don't do seconds / Come to the floss, see your new check in / Clase Azul before the mood set in”

Pop Smoke has achieved ubiquity in death, judging by the number of protests across the country where his “Dior” became a principal part of the soundtrack. For the past two weeks, stories abound of the single’s appearance in one capacity or another, with multiple writers focusing on the phenomenon in their attempts to document this incredible and ongoing moment in the Black Lives Matter movement. While there’s something inherently profound about a nation of largely young people making a seemingly apolitical track like this into a kind of anthem, the brief homage Brooklyn rapper Rah Swish pays with “Woo Forever” adds a necessary context. There is a pain that’s being still felt from the loss, one numbed somewhat by liquor and prescription drugs. It’s that emotional weight, I’d argue, that gives “Dior” this second life among those taking to the streets to demand genuine justice and sweeping reform.

This newsletter marks the fourteenth installment of Irregular Vegetables, a weekly series of CABBAGES emails where I share links to recent writings from other hip-hop/rap journos and critics, squeezing in my own work as I see fit. These midweek editions hit inboxes every Thursday as we all self-quarantine and try to protect the most vulnerable among us from COVID-19. No Q&A this time around, so just go and enjoy this week’s reads.

Why Are The NYPD ‘Hip-Hop Police’ Spying On Rappers?

The story of the New York Police Department’s so-called “hip-hop police”—now known as the Enterprise Operations Unit—begins with Derrick Parker. Parker was a detective in the NYPD who, in 1996, joined the department’s Cold Case Squad. He was also a longtime hip-hop aficionado who knew a lot of players in the industry. Following the Notorious B.I.G.’s murder in 1997, Parker says he caught up other members of the NYPD on rap’s major players, giving them a four-hour presentation about the East Coast/West Coast rivalry. (Interestingly, Parker claims that when Biggie went to L.A. for the trip that would get him killed, he was followed there by NYPD officers from the department’s Major Case Squad—he remembers only that it had to do with “some robberies or something.”) (Read more at Complex)

The flagrant misogyny of “Snow On Tha Bluff” undercut whatever conversation Cole was trying to start within the Black community. The tone-deaf track showed Cole’s novice understanding of radical politics when he could have been uplifting Black women. Noname replied to the record by tweeting “Queen Tone” last night, seemingly joking Cole’s criticisms off. But it wouldn’t be surprising if the sentiment hurt her during a week that’s already been tough for Black women. Earlier this week, Oluwatoyin Salau, a 19-year-old activist from Florida, was found dead days after publicly tweeting that she was sexually assaulted. (Read more at Uproxx)

Warmly greeted with the honorific “Uncle Russ,” he is granted an unfettered and largely unchallenged space to push his counter-narrative on the largest urban platform from his remote enclave in Bali. Safe from any extradition laws, Simmons insisted that his bevy of romantic relationships with women in Hollywood that have transitioned into extended platonic relationships – in addition to his inclusive hiring practices – inoculate him from criticism. When pressed, he parried with “I really don’t think we should be relitigating 30-year-old stories that had never been told,” a statement that is incorrect considering his accusers — Drew Dixon, Sheri Sher, and Sil Lai Abrams — have alluded to the stories in public in various capacities. He alleged that “any investigative reporter would tell you that those stories would have been printed,” dismissing the thorough work of the New York Times and Hollywood Reporter investigative teams. Perhaps most troubling about this interview was that it was allowed to be co-led by Charlamagne tha God, a man with his own documented history of admitted gendered domestic violence and credible rape allegations of his very own. (Read more at Okayplayer)

Songs like “PTSD,” “Scenario,” and “Better Have Your Gun” from his first project, ‘Meet the Woo,’ all now hit different, transforming into a perfect encapsulation of the frenetic, rebellious energy now coursing through the veins of every New Yorker marching through its streets. Track after track, Pop litters acknowledgments to treasured friends who are still making their way through the prison industrial complex, using his distinctive gravelly inflection to depict the extent in which police interference has become accepted as part of their day-to-day life and interactions. (Read more at Nylon)

‘Shrines’ finds woods and ELUCID staring into the abyss, of course, but the abyss is too taken to smile back. As the adage goes, neither woods nor ELUCID become the monsters they face across their joint and solo discographies—we have little to fear as they do battle with themselves, as on woods’ 2019 record ‘Hiding Places’ or ELUCID’s chaotic production history, or 2016’s ‘Save Yourself.’ I could throw a hundred fresh superlatives at Shrines. It is the most this and the best that. ‘Shrines’ is billy woods and ELUCID at the peak of their collective power. Deadly and graceful microphone killers. Their dedication to craft, and the ease with which they improve and grow, makes them one of the most important rap duos, period. (Read more at DJBooth)

Dua Saleh Is Your Angel and Your Devil

“I want a world where people don't have to think about the sociopolitical implications of their existence. It gets so exhausting to think about yourself in relationship to power. Sometimes you just want to fucking watch Netflix and not think about violence, but it's hard to do that. Even when I'm trying to unwind, I'll be watching a show or I'll be watching anime and something will happen, there will be fatphobia or homophobia or there will be transmisogyny I see and then I'm taken out of this healing realm that I'm in.” (Read more at Paper)

For The Girls: It’s Finally Time For Nigerian Rap To Embrace Its Women.

Thankfully, we’re slowly shedding the archaic belief that only one woman can be on top of the game at a time, especially with the current class of female rappers ready to show their each other support and the growing community being fostered amongst them. Women are wising up to the fact that we’re all fighting the same fight and feeding into the staged-drama from critics to fans alike, which doesn’t eve particularly give you a seat at the boy’s table. We need to be coming together and nurturing a more collaborative atmosphere amongst the women in hip-hop/rap because we’re oftentimes our only allies. (Read more at The NATIVE)

From Serving Beans To Bidding Wars: A Look At 42 Dugg

Dugg’s music doesn’t try to match the eccentricity of someone like Sada Baby or the absurd lyricism of Rio Da Yung Og. Instead, he’s part of a lineage of rappers in the same vein as the Peezy, Payroll Giovanni and the late Blade Icewood, penning grounded memorials to friends who’ve passed away and detailed stories about past hustles. Dugg’s been able to skirt these comparisons to others because of his half-rapped, half-sung delivery. He carved his own spot out in the city’s rap ecosystem by combining his grief-stricken songwriting with Detroit’s staple funky, synthesizer-heavy beats. (Read more at Passion Of The Weiss)

The dream isn’t limited to creating the collective and building the industry in Medellin. The idea that Latin artists once had to sing in the English to collaborate with American artists or reach global recognition has long been abandoned and DJ Pope wants to go global. “I believe 574 will easily become an empire,” says HOMIE!. With an endless list of projects in the works featuring artists like Eladio Carrion, C Tangana, Diplo; and veterans like Jowell y Randy, Trebol Clans, it is sure to be the case and just the beginning. (Read more at Remezcla)

“19 Dolla Lapdance” is shit-talking at its finest. It’s not so much a song as it is a barrage of roasts slammed on top of a unmistakably hyphy bassline. Suga Free’s shrieking hook supplies the necessary energy, while he later delivers what might be the EP’s most memorable quotable: “The only way you’ll get laid is if you crawl up a chicken’s ass and wait.” Through and through, Suga’s line and the other mockeries around it perfectly define ‘The Curb Commentator Channel 1.’ The tape feels like a time capsule back to a 2006 SportsCenter clip. (Read more at HipHopDX)

‘Separate and Unequal’: How ‘Pop’ Music Holds Black Artists Back

Take a very recent example: Megan Thee Stallion invented the “Hot Girl Summer” meme and released an accompanying single which was an “urban” radio hit. The white singer blackbear grabbed the concept for his own “Hot Girl Bummer,” which was played heavily on pop radio. Since that format reaches many more listeners — 93 million impressions last week on the “pop” Number One, compared to 36 million for the “urban” Number One — “Hot Girl Bummer” has nearly 160 million more streams in the U.S. than “Hot Girl Summer.” (Read more at Rolling Stone)

The Unlikely Soundtrack Of The New York Protests

The same could be said for Chicago Drill rapper Chief Keef, who’s 2015 track “Faneto” has been appropriated for the movement. With anti-cop lyrics, the song’s relevance to the Black Lives Matter movement is perhaps clearer than “Dior,” but the trap anthem is still a surprisingly welcome addition to the likes of Bob Marley, Gil Scott-Heron and Kendrick Lamar. Keef’s bars about driving through New York and evading the feds mesh surprisingly well with protesters’ chants of solidarity and strength in trying times. It justifies the needed release of anger and frustration, which is constantly suppressed in marginalized communities.” (Read more at i-D)